by Subash Ramone
in All, Geek, Indie, Interviews
0

Timothy, please tell me how and when did Tantanmen Games started?

So for my day job I actually work for a Property Development company in Kuala Lumpur called IGB Berhad. Back in around September 2016, my cousin and I were having lunch with the CEO, and he started talking about an idea for a video game. He doesn’t play video games himself but he’s a natural entrepreneur, and he comes up with the greatest ideas for new ventures. He was aware that my cousin and I were avid gamers, so he started telling us about his idea for a war game you could play on your phone where you would fight against other people. The kicker was that you would use real world money to build and deploy your army and you could actually place bets on who would win, be it whether you were the one fighting or if you were a spectator. Personally, I thought it was exciting because if there was a game like this, yes, barriers of entry for the game may be a little high, but it would put ACTUAL stake into the game, and it’d give someone a greater sense of urgency to win; which I thought would be groundbreaking for a game. So Yee Seng and I jumped at the chance and we were like, “Yep, we can make something like that, leave it to us!”

Neither of us actually had a programming background – Yee Seng has an architecture background and I have two degrees – one in Economics and another in Music… but oh do we love video games. There was this studio called AeonSparx that did 3D modelling work for IGB, and that’s how we ended up bringing them on to help us bring this idea to life. In the meantime I drew up the paperwork to start up a new company, came up with a name (inspired by our love for ramen), a design for the logo, and that’s the story of how Tantanmen Games got started.

I was wondering how that name came about. Hahahaha. Now you mentioned you were avid gamers and all. What were your favourite games?

Ugh, so many. I’d have to say FFVII, Valkyrie Profile and Resident Evil II are super iconic for me… but Legend of Legaia, Parasite Eve, Star Ocean: Second Story, Um Jammer Lammy and Pokemon Yellow deserve a special mention; but as you can see I really enjoy my RPGs. Red Alert is a given, of course. I grew up in the SNES era but I only really started playing video games proper with the first PlayStation.. and I was super gung ho with these games! Like I’d go on CheatCC, print out the walkthroughs, scan the front covers of the games and bind them into books. I also really like the Tomb Raider series, the Shin Megami Tensei games and basically anything open-world. For the premise behind Hexlords… do you know how a lot of movies, TV Shows and games do an alternate reality based on the Nazis winning World War II? I sort of turned it on its head and went, “what if the Allied forces still won, but instead of going about their own business like what they have done in the real world, they decided to create a global government to prevent war from ever happening again?”

The game takes places in 2020, and for 75 years, borders are open, there is cooperation between every country, and the world is thriving. While all this is happening however, there is an underground market bubbling underneath the surface, trading in black market goods and services that this government deems illegal, like Private Military companies, and weaponry; and they use this cryptocurrency we call Hexbit to complete transactions. This is when I put in the real world, where Trump comes into power, and Brexit happens; so there is now a sentiment that people want to separate themselves from the United Democratic Government (which is what I call this global government), but the UDG doesn’t want that to happen. So the story behind the game is basically two contradicting trains of thought fighting against each other for their beliefs and there are these underground warlords i.e. you, taking advantage of all this chaos.

The gameplay itself is a mix of two mechanics – there is a building aspect and the actual battle element. When you build, you sort of have to ‘Tetris’ different buildings into your base, which has a limited amount of space. These buildings give you different types of units to play with and there are a ton to choose from, so we always encourage players to try and build more bases to really find out what their play style is.

The actual battles themselves is using the tried and true formula of Tower Defense – all you would want to do is drag and drop the right unit into battle and they will automatically head towards the enemy base, hopefully destroy one of their checkpoints to ultimately reach their base to demolish it before the other player does. You get to play with 4 different factions, the United, the Guard, the Modernists, and the Zealots, all with different themes to their styles and hero characters. 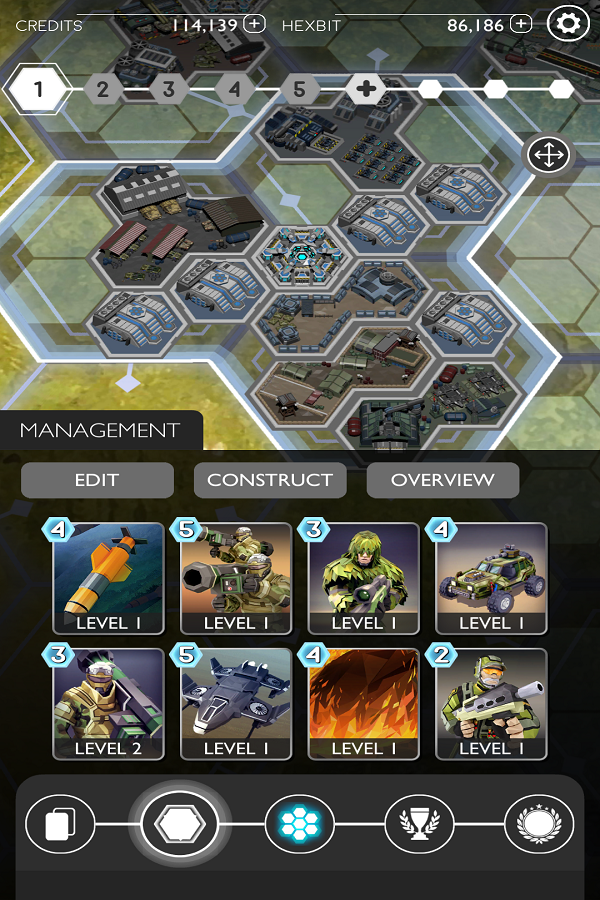 And how did you get the idea for it?

A lot of percolating! It took me a while to come up with a cohesive story for our universe, as well as getting inspiration from different places for the artwork, which is sort of like a mix between low-polygonal realism and delicate character portraiture… if that makes sense? The art itself took a lot of rejigging to find the right vibe. While the story is what I like to think of as an original, I used a lot of references to pinpoint what a world would look like if everyone in the world just worked with each other instead of fighting.

The game is also what I like to call a Red Alert Mini. Red Alert was one of the first games I ever played and I loved it. It was a fitting inspiration to cite for a game about war. My initial idea for the game was one based off the game play of Romance of the Three Kingdoms, or Nobunaga’s Ambition, which I was playing at the time. A lot of micromanaging economies and marrying people from different states to form alliances. Alas, the team thought that that would’ve been too complex for a casual mobile game.

Those are some solid games for inspirations, Timothy. hahaha. So what’s next for Tantanmen Games? different game? sequel to Hexlords?

Next for Tantanmen Games? Hopefully both, haha! I want to keep on updating Hexlords to keep it relevant – new heroes, new buildings, etc. I think I created a great universe to create more Hexlords games in… like what happened between 1945 and 2020? Were there riots? Was everyone a Stepford Wife? Was Miley Cyrus born? Existential questions like that.

I would also really love to make a VR horror game. I don’t want to give too much away but I’d like to make it about real world fears and wrap it up in a nice metaphor – not your typical pale scary preteen girl with long black hair gig.

Woah… VR Horror… I am intrigued. So where and how can one purchase Hexlords?

We are in early access in the Google Play Store! Free to play but help a brother out when we enable in app purchases. 😊 We are currently planning on doing a full release on both Android and iOS before the holidays. But yeah, give us some feedback if you download it, give us a like on Facebook, follow us on Instagram… and enjoy the game! Any words of encouragement to those who wish to be game developers?

I’ll have more to offer if this game is a success! Right now all I’d be able to tell other people is to have a great idea – or have an idea that you really think is great. Stand behind it and make sure it’s different, or unique, but still plays bloody well. And market the hell out of it. There are so many other developers and games vying for gamers’ attentions so you really need to stand out. There is this book I read – Tribes by Seth Godin. A little idealistic, but he basically says that whatever you create, you have a chance to start a tribe, or a movement; as long as you’re not afraid to lead, to question how things have been done and to start something different. Could be a big tribe, could be a small tribe, but a group of people who stand behind you nonetheless.

For more info and early registration on Hexlords, click here.

GameXtreme bargain deals at The Techshow 2018